Let us be your One Stop Dog and Cat Shop!

You will find a generous variety of specialty cookies at Tail Waggins. Along with our fully operational, onsite bakery, we offer Premium Foods, Raw Foods, Gifts, Cats Foods and Supplies, Full Service Grooming and our Luxury Dog Wash Spa.

Our Self Service Dog Spa will surpass all your expectations. Our elevated Marble lined tubs make washing your dog so easy. We supply everything you need. Bring them in dirty, take them home, we clean up the mess. 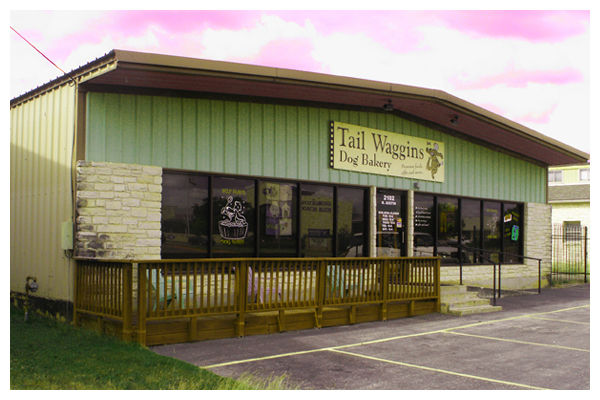 Lexi was left out in the back yard by Diane’s nanny, on the day workmen were due to re-roof the house. The crew arrived and began work. Shingles were flying off the roof, and air-powered nail guns created a racket which sent Lexi into spasms of fear. When one of the crew opened the gate, and walked away, Lexi bolted.

Lexi was gone for 15 days. Diane and her husband Pete launched a massive hunt for their beloved pet. Hundreds of flyers were distributed, neighborhoods canvassed door-to-door, ads placed in the paper, and a reward posted. During the search, Diane got a call offering the services of a very talented hound, DoLittle, who tracked Lexi to a group of apartments where the search intensified.

As it turns out, an unscrupulous apartment manager had been holding Lexi, and was going to give her to her mother for a present. When she tried to get Lexi into her car, Lexi took off (Lexi gets very car-sick). Later that day, Diane found Lexi in the woods behind the apartment complex.

Not too long after Tail Waggins’ first public appearance at a microchip clinic in Georgetown, Diane was hospitalized and ended up fighting for her life as the result of a routine outpatient procedure. Diane was in the hospital for almost a month, and during that time she had people all over the country praying for her. But none like her family and friends here in the Austin area.

When Diane was finally able to return home, she was unable to return to work. With extra time and a new outlook on life, the bakery took on a new sense of purpose. Their new determination drove the bakery to where it is today. Their plans eventually include a brick-and-mortar store-front here in the Austin Metro area.

That was 14 years ago. Lexi has since crossed over the Rainbow Bridge, but we still have her sister, Kira. We have since added Teegan, a rescue out of West Virginia, who has also crossed over the Rainbow Bridge, and Kelsey, a foster failure of ours from Austin Sheltie Rescue. We have recently rescued a Chihuahua/German Shepherd mix, Tulio, who is keeping this household very lively.

Along with our canine household of 3, we have 5 cats that enrich our lives. We have a 16 yr old rescue Calico, Paige, who came from Austin Animal Center that was within hours of being euthanized. We have 3 Bengals, Z’Hari, Machiah & Aleiah, who is battling Intestinal Lymphoma, and a recently trapped and tamed Dilute Calico feral, Kalista.

Tail Waggins has blossomed into more than just a bakery, we are a fun place for your pets to come and shop. We gladly lavish your pets with attention and love.

Tail Waggins is proud to offer healthy, natural, preservative free treats. We have formulated each recipe to be free of salt, processed sugar, white flour, corn, or corn products. We hand craft each batch to individually form each cookie, providing every treat with its own unique character. Nothing but quality and love go into our treats.

WHAT Georgetown CUSTOMERS ARE SAYING

They saved the day!! My Yorkie's 4th birthday is around the holidays and with the hustle and bustle we failed to order her cupcake.(I know, bad doggie mom) However, my husband made a call and Tail Waggins came to the rescue! They even told my husband they would wait for him since it was closing time. We will definitely be back! Thank y'all so much!!

I have been coming to Tail Waggins since 2009 and NEVER been disappointed with service, product or supply. Absolutely stunning customer service!

Great little pet boutique. A bit on the expensive side but she had what I couldn't find anywhere else.

We passed through Georgetown and made a bakery stop for our dogs. One of the best pet stores I’ve ever been to. Very helpful in fitting my dogs with harnesses. Lots of frozen raw foods to pick from. Just an all around good feel.

View All Reviews Write A Review
Come visit our pet supply store in the Georgetown, TX specializing in quality food, treats, and supplies for cats and dogs.